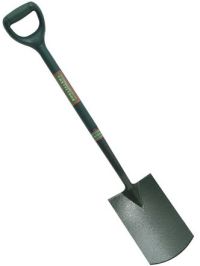 ...is a spade. I call it a spade, not a euphemistic digging implement.

Its use as a bathroom facility tool will become apparent shortly. But the main reason for initially mentioning it in a proverbial context, is that if you're offended by words such as "urine" or "faeces", click away now.

When we moved in, toilet facilities were non-existent. No, actually that's not quite true. There was a purpose-built brick outhouse adjacent to the barn, with a plastic toilet seat fitted to a concrete bench, with a plastic bucket underneath. Goodness knows where the aged FIL used to empty it. I certainly wasn't going to ask. The outhouse was immediately classified as unfit for use, and wearing a full NBC suit I carried the plastic bucket into the woods, where the desiccated contents were given a decent burial.

Now our idea was to purchase a proper composting toilet, which would be installed together with a proper shower, bath and sink in a proper bathroom. The barn adjoining the house would be subdivided into four rooms; two bedrooms, a study, and a bathroom. However, the first thing which needed to be done for this subdivision would be the installation of a proper floor; and it would be at least six months before work could be started on this particular phase of the project. (More important phases included the provision of potable water, and insulation against the oncoming winter!)

The ideal toilet from an ecological standpoint was one which separated the urine and faeces. The faeces could be composted, and used as fertilizer for fruit trees; and the urine could be mixed with water and used in the garden. Urine is a very good nitrogen-rich fertilizer as long as it is diluted with water.

But until such time as we could obtain a proper composting toilet, there was really only one option available; namely, to construct a latrine.

Phase One: The Latrine

After a couple of months use, I made an exciting discovery in one of the outbuildings. This enabled us to move on to the second phase much earlier than we expected:

With regard to other bathroom facilities i.e. washing, we made do with what was available. This was not too bad in summer:

A Bath With a View

But of course, with winter on the way, this soon became rather chilly. Instead we began using...

And eventually, after a lot of work, we finally ended up with:


As far as wastewater is concerned, a reedbed was installed as our greywater treatment system. It will only handle grey water from washing, dishwashing, and the washing machine; so no faecal matter or urine will enter it.