And considering the alternatives, it's actually not that expensive. As we are not on a mains sewer system, the customary alternative would be the installation of a septic tank. Not only would the cost of installing one of these be much more than the cost of the Separett, but they need to be emptied regularly as well (which entails further costs). And another disadvantage - have you any idea how much water is wasted by a flushing toilet?

When John Harington (no, it wasn't Thomas Crapper) invented the flush toilet in 1596, water conservation was obviously not one of his priorities! We actually experimented in our previous house in Reading by using rainwater in a watering can to flush the toilet after urination, and we saved nearly 50% on our water bill.

So a waterless composting toilet was certainly a green (and in the long run, cheaper) alternative to the flush toilet. There are obviously other brands of composting toilet available. Quite a few of these have a separate tank, which is designed to be installed in the basement underneath the toilet itself. This would have been of no use to us because La Darnoire has no basement.

We wanted something as self-contained as possible, and it had to have a urine-diverting function. That mephitic odour you smell if you drive past public sewer works is there because urine and faeces are mixed together. If they are kept separate, there is very little smell at all. And both constituents can be recycled back into nature as organic fertilizer. The book shown on the right, "Liquid Gold" is not only an interesting read, but has several good ideas for the use of urine as a plant fertilizer.

The Separett is a Swedish design. We selected the Villa 9010 model; as this is designed to run off a 12V battery (it also has a connector for 220V by the way). As we will be installing solar panels at a later date, the 12V possibility was important.

The original plan was to wait until we had started renovating the attached barn before purchasing the Separett. However, when I was cleaning out one of the small outbuildings, once the accumulated detritus of thirty years had been removed I discovered it had a concrete floor in very good condition! So we immediately designated this room as the temporary toilet, even though you have to bend double to go through the doorway.

(Up until this point it had not been very pleasant visiting the latrine when it was raining. Not only that, but prior to every visit we had to cover our bottoms with mosquito repellant. Although this proved effective against mosquito bites in unmentionable places, we found that unfortunately mosquito repellant is completely ignored by biting horseflies. I'll leave the effects to your imagination).

So, having chosen the model we wanted, we investigated the possibility of buying one in France. We found a company that sells them, but the prices were higher than those recommended by Separett themselves. Delivery charges were not included. But not only that, the company stated on their website that orders were subject to four month's delay. Four months! So instead we ordered one from a company in Germany. Free delivery, prices as stated on the main Separett website, and we received it in a week. 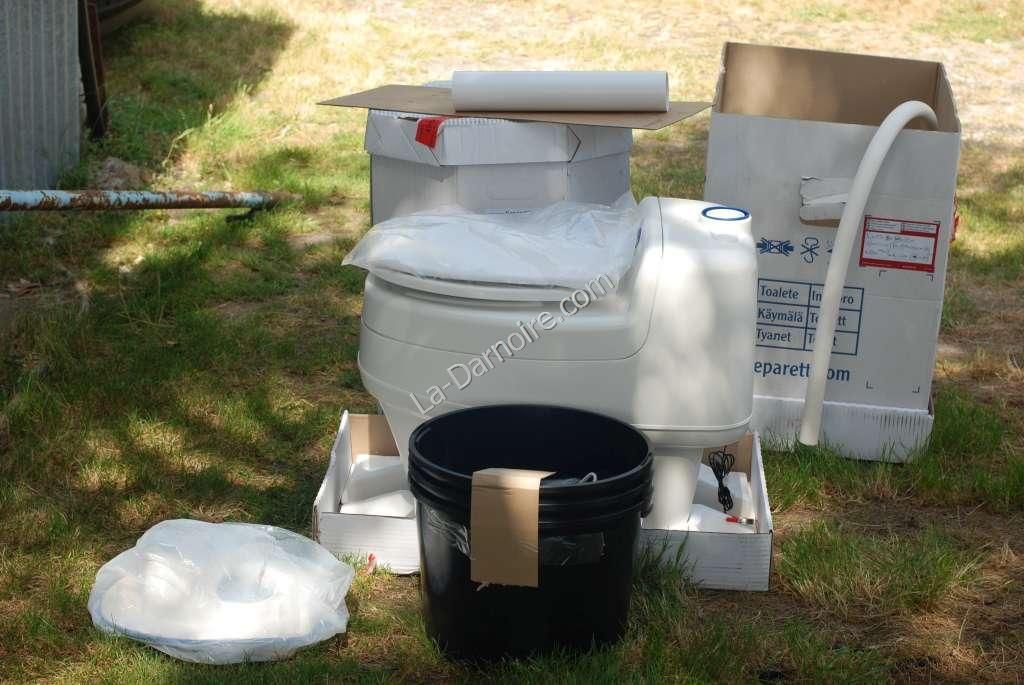 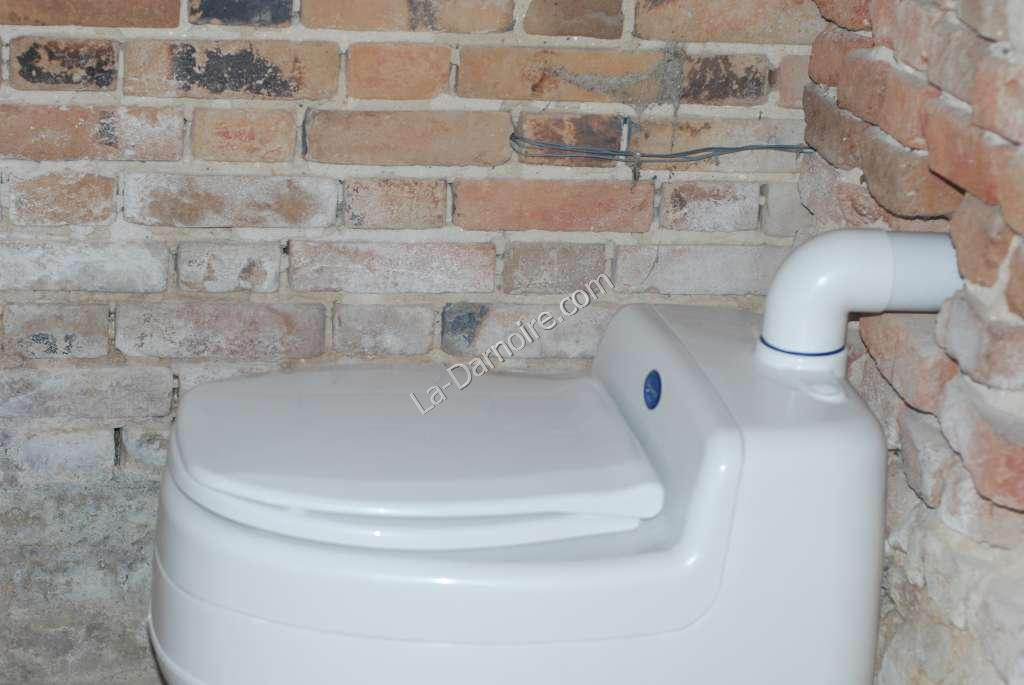 Installation was extremely simple, as there is not much to assemble. A printed leaflet with diagrams describes the process. The only semi-difficult bit is drilling the holes in the external wall, but a cardboard template is provided for this so that the holes are drilled in the correct location.

The smaller diameter hole (32mm) is for the urine outlet pipe, and the larger (75mm) is for the ventilation pipe. This pipe could also be routed upwards through the roof if you so desired.

To drill the holes you will need two coring-type drill bits if you want a neat finish. You could of course drill lots of small holes in a circle and then knock out the middle bit with a chisel, but something like a diamond masonry hole saw will do the job. As our Separett will not be installed in this room permanently, I did not fix it to the wall using the supplied brackets, but instead placed it on a large rubber mat which prevents it from moving.

At the front of the bowl is a plastic divider, separating the urine (which flows under gravity to a separate tank called an "Ejectortank") from the faeces, which are contained in what is to all extents and purposes, a bucket lined with a plastic bag. The plastic bag itself is biodegradable. One has to seat oneself on the device rather carefully, to ensure that the urine does not enter the bucket. Of course this is fairly easy if you're a male, as the male urinary system has an extension. However, for female use, the positioning of the posterior is a bit more tricky, especially if you're attempting to use both sections at once.

When sitting down, the pressure on the seat operates a concealing screen which normally hides the contents of the waste container. The screen moves to one side, and at the same time the container is rotated so that the contents are evenly distributed.

After each use, it is recommended to pour a small quantity of water into the front urine drain.

A small fan runs constantly, causing the contents of the plastic bucket to desiccate. Any odours and moisture are evacuated through the vent pipe. This drying process decreases the amount of volume of the solid matter, so the container does not fill up as quickly as you'd think. Toilet paper can be disposed of in the bucket as you would normally do with a flush toilet. It helps to separate the faeces and adds to the drying process. However, if a female is visiting the toilet purely for urination, it is best to place the toilet paper into a separate bag. This helps to prevent the bucket from filling up too quickly. Disposing of this toilet paper could be done with the normal household waste, or, in our case, it is burnt in the incinerator when I light it to make the next batch of charcoal.

Once the main container is full, a shovel full of earth is added to the contents, and a lid is then placed on the container, which is placed outdoors where composting occurs naturally. Six months later, the compost can be dug into the soil and the container rinsed and used again. By this time, any pathogens present in the faeces have been eliminated. (However, if any member of the household is taking medication, the composting period should be two years.)

The toilet itself was very easy to install. And it functions no matter what the temperature, even if below freezing (Separett recommend that if the temperature is below zero, one should sit down carefully to avoid cracking the plastic seat!)

So, I'm sure you're interested in finding out how the Separett has worked.

With regard to capacity, Separett's brochure says that for a family of four using the toilet normally, the 23 litre container needs to be changed every 3 - 6 weeks (the toilet is supplied with three containers and lids). In our case I've found that the plastic bucket needs to be emptied once a month. But because the contents take six months to be rendered harmless, three containers are insufficient. Ideally seven containers are required. One could of course order additional plastic buckets from Separett, but as we had found several decrepit, large, galvanized buckets (with lids) lying around, we used these instead - just for the composting process. The contents of the "official" plastic bucket are simply transferred (still in the plastic bag) into one of the galvanized buckets; the "official" plastic bucket is then cleaned and reinstalled in the composting toilet.

The urine container (50 litres) is emptied at around the same time. It has a float which indicates when the container is full, although we have found that the float tends to get stuck when the tank reaches around 75% capacity. Some red insulation tape indicates the full mark, and the insulation tape binds on the hole in the lid. Replacing this insulation tape with a line of red paint would be a good idea.

Emptying the tank is a fairly straightforward thing to do; simply connect a garden hose to a connector on the Ejectortank, and water pressure mixes the urine and water at the correct 8:1 ratio to be used in the garden. We did find the outlet hose to be a bit short, however; it's only 10 metres long. A further 10 metre extension can be added if necessary. Another issue we found was that our water pressure was not quite sufficient, so the Ejectortank has had to be emptied by hand a couple of times (this was prior to the installation of our borehole).

The galvanized buckets were stored at the bottom end of the garden for a while. However, they looked a bit unsightly, so I considered making and installing a wicker screen to hide them. In the end, based on further research, we have now changed our method.

Since this web page was first published, I have now constructed a decent-sized composting area, so the full plastic bags are now simply placed into this years' compost bin and covered with grass clippings; although first of all the second (external, non-biodegradable) plastic bag needs to be removed. We have found that by using a second plastic bag in this way we don't even have to wash the plastic Separett bucket. However, if you're going to use this method, I would recommended wearing rubber gloves, and I would point out it is not for the squeamish. The second (external) plastic bag then goes into the incinerator - it is not possible to re-use it as I initially thought. The composting waste needs to be left to decompose for two years before the compost can be dug into the garden.

Until such time as we convert a section of the barn into a proper bathroom, the other activities one can list under "bathroom facilities" (i.e. washing) are carried out in one of two places, depending on the season. The summer bathroom is detailed here: A Bath With a View.