La Darnoire had been unoccupied for thirty years. The plaster at the base of the walls to a height of about a metre was a bit stained from rising damp - that is, the plaster which remained. Lots of it had fallen away from the walls leaving bare brick. 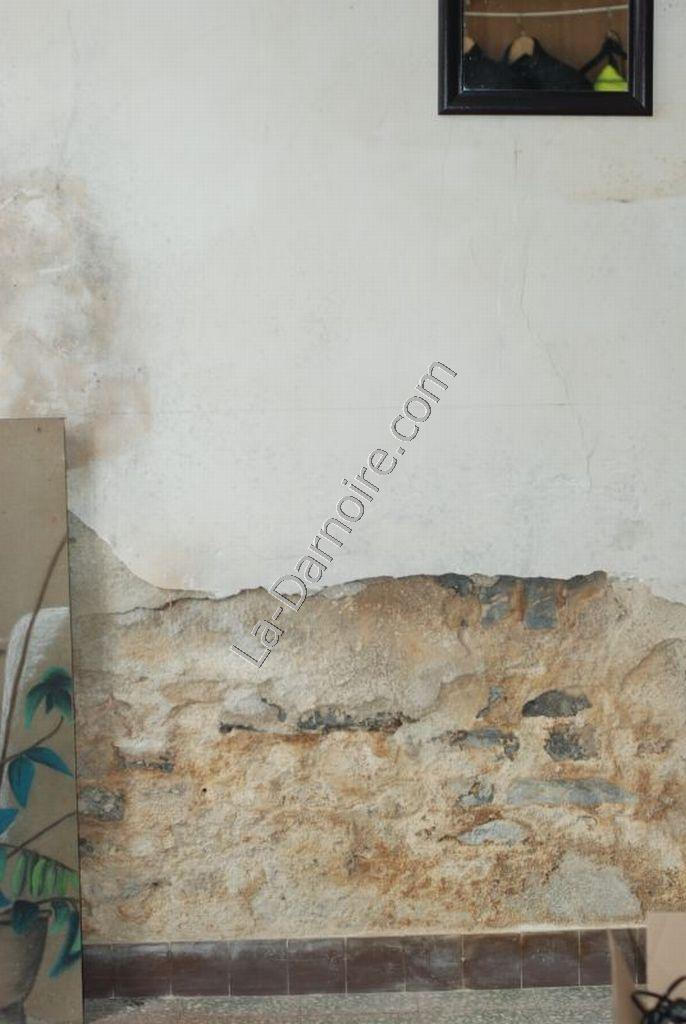 It was only five months after we'd moved in that we noticed a musty smell in one of the two rooms; the one we were using as a bedroom. Our bed has storage drawers underneath, and when LSS opened these, we were horrified to discover that they were mouldy. Not only that, but my leather motorcycle jacket and trousers which were hanging on a coat rail had started to turn green. By this time I had replaced the draughty old windows and doors in the house with double-glazed units.


Researching the problem online was not much help. Most of the advice offered was from the USA and was not relevant to the building methods used for this particular farmhouse. I even asked a boating friend for suggestions without success.

A word about the building construction:
There are no foundations; it appears a layer of gravel was laid down in a shallow trench, and the bricks were laid on that. There is obviously no damp-proof course. Because lime mortar was used in the construction, the lack of a damp-proof course is not really an issue; lime mortar "breathes" so it allows the damp to rise and evaporate. (This is why one should not cover or replace lime mortar with cement-based render). Of course, a previous owner had done just that. They had discovered the joys of cement; and the kitchen had been entirely replastered with a non-breathable cement render, as were the external walls of the house to a height of just over a metre.

Mould requires three things to flourish. A food source, the right temperature, and a moisture content of 65% or above.
There was not much we could do about the first two, but we decided to try and improve ventilation and reduce the humidity in the house. Putting a dehumidifier in each room would have been impractical and energy-hungry, so we decided to try installing an extractor fan.

We bought the kit fairly cheaply from our favourite DIY place in France, Brico Depot (they always have stock, unlike other hardware stores!)
They call it a VMC here (Ventilation Mécanique Contrôlée). There were three outlets, a larger vent intended for installation in the kitchen, and two smaller ones, for the bathroom and lavatory.

Obviously we don't have the latter two rooms (yet!) so the larger vent was installed in the ceiling of the pantry adjacent to the kitchen, and the two smaller ones in the bedroom ceiling. The exhaust outlet was simply led outside, through a gap between the top of the wall and the rafters. The VMC itself was simply suspended from a couple of roof beams. 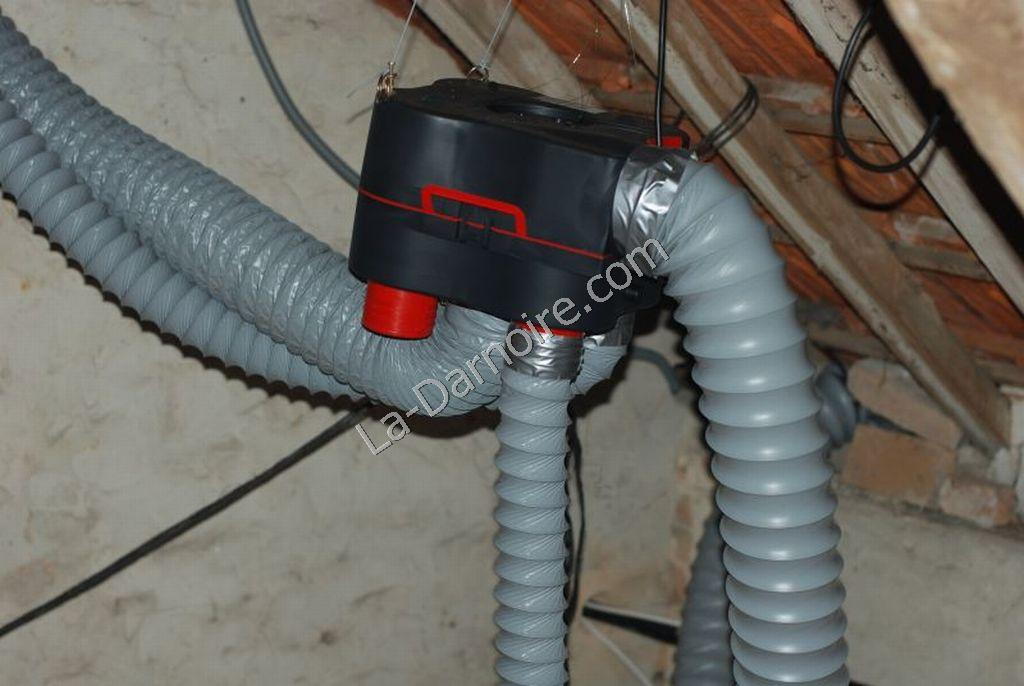 This particular model has an automatic fan, with two speeds depending on the humidity setting. We set it so that the fast speed starts at 65% relative humidity. It makes a fair amount of noise, although from inside the house this is not very noticeable at all.

Prior to buying this particular model, we weren't too sure whether it would help at all, so we were reluctant to throw loads of money at the problem, and as a result bought the cheapest model available (and to put icing on the cake it was discounted at the time!)

So, what has been the outcome?

Well, we removed all the mould growths by wiping the mouldy items with a neat vinegar solution (ordinary white spirit vinegar at 8% strength). We used this rather than buying expensive anti-mould products. Sunlight helps too; after we had wiped off the mould, items were placed outside in the direct sunlight to dry - the ultraviolet light kills mould spores.

LSS also removed the remaining loose plaster from the lower part of the walls in the bedroom. We will leave the bare bricks as they are for the time being, to aid the walls in drying out, until such time as I get around to replastering the walls using lime render.


One month after the installation of the VMC, the mouldy smell has gone, and we seem to have triumphed over the mould growth. However, installing the extraction fan system has had a down side. Now the wood stove in the kitchen smokes like crazy when it's first lit, because the inside of the house appears to have a lower air pressure than outside. We've solved this problem by turning off the VMC prior to lighting the stove (I installed a plug with a remote control on/off switch). Once the stovepipe is too hot to touch, the VMC can then be turned back on.

In conclusion, adequate ventilation appears to be the key in getting rid of mould.

Although we don't regret buying the cheapest model, which was somewhat of an experiment, we will probably upgrade it at a future date to a proper heat recovery ventilation system.