I'd never seen a borehole being drilled before, so whilst the borehole construction was in progress, I was in the thick of the action with my camera.

The first event was the arrival of a small excavator. Its task was to dig three great big holes next to each other, each having a volume of three cubic metres, and linked together with a shallow trench. Because the terrain consists of deep clay, these holes would be used to hold water for lubricating the drill and flushing out the drill hole. 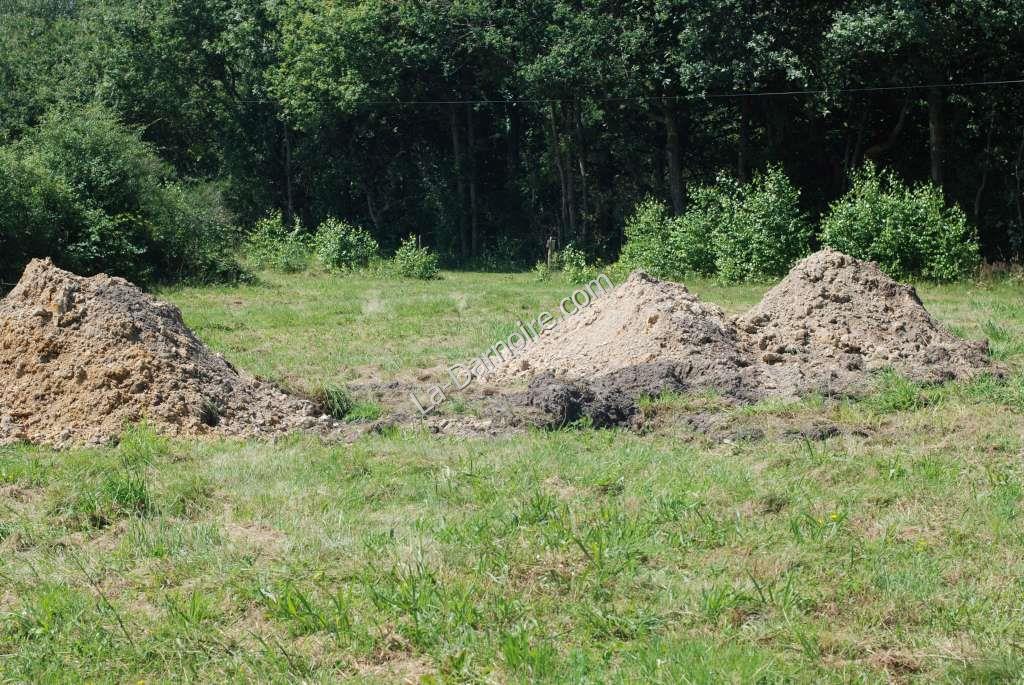 A small petrol-engined pump was then used to fill the holes, using our pond as a water source. Approximately 10 cubic metres of water was used (10,000 litres) but we were surprised that the water level in the pond only dropped about 20cm. We only hoped that not too many little fish were sucked up through the pipes. You can see the shallow connecting-trenches in the next photo: 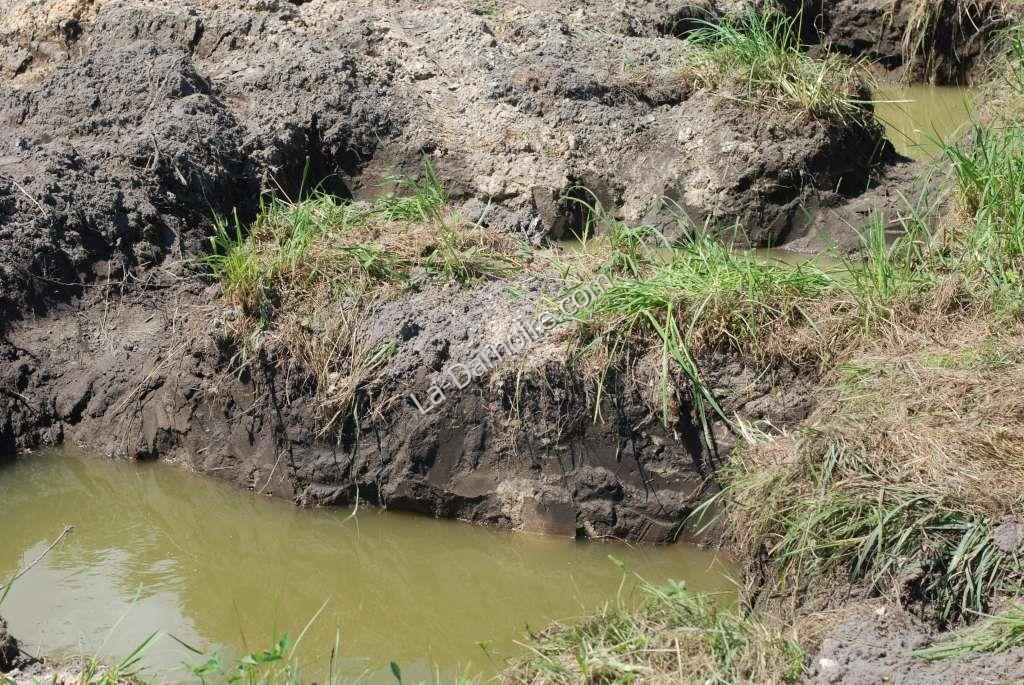 The following day, the main equipment turned up. This consisted of the tracked borehole-drilling machine, a huge Atlas Copco compressor on the back of a truck, and a Land Rover 130 with a trailer loaded with gravel and pipes. Apparently the borehole company uses the Land Rover because it's the only vehicle rated for pulling such a heavy trailer. 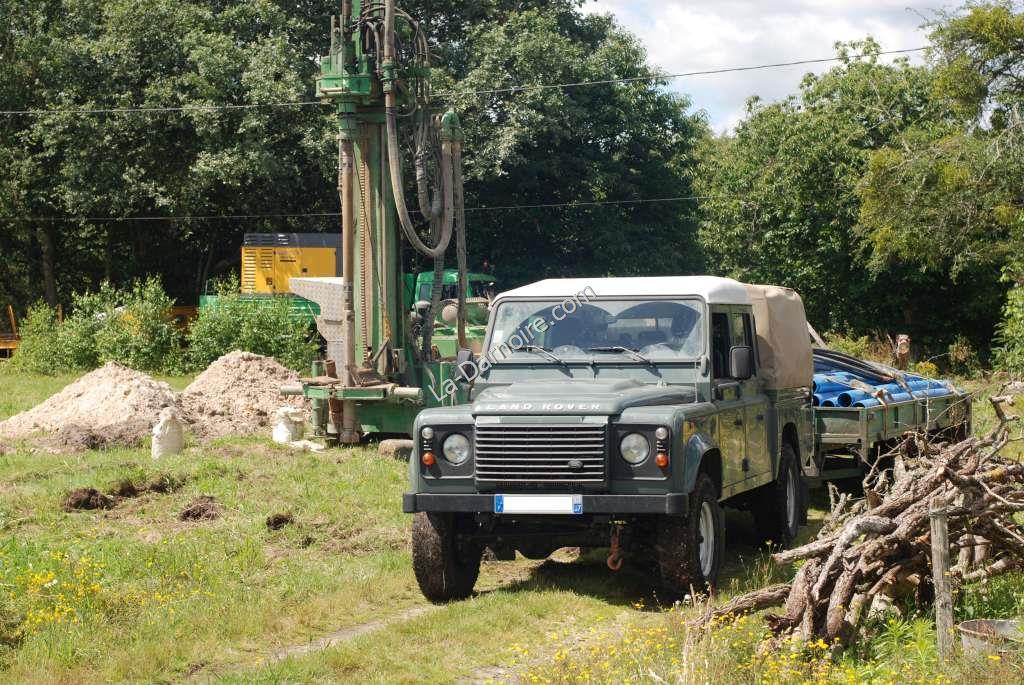 The tracked borehole drill was put in position, and some sacks of powder were added to the water in the mud holes. The purpose of this stuff was to bind the clay particles together and prevent the sides of the holes from collapsing once drilling started. Apparently it's also bio-degradable. I forgot to write down what it was called. 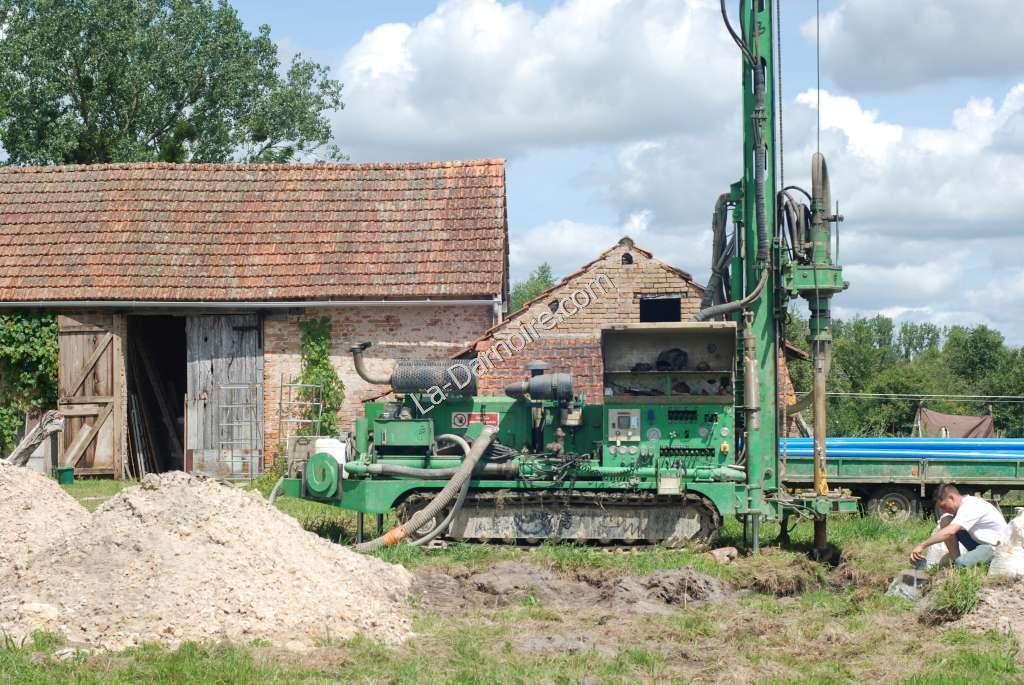 Drilling then commenced. As each 4-metre length of drill bit disappeared down the hole, another length was swung into place and screwed on to the top. Water was sucked up from the third mudhole and pumped down the inside of the drill shaft to the drilling head. From there it flowed around the outside of the drill shaft to the surface, carrying the "cuttings" with it. I think that's the correct term for the debris which comes out of a borehole! 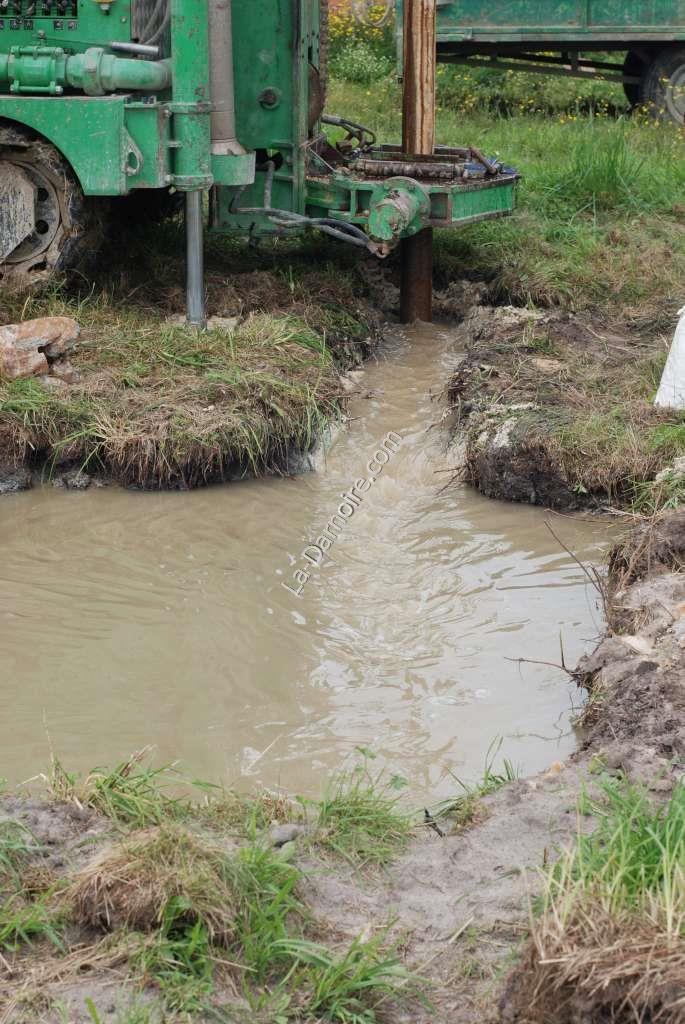 After every metre or so of drilling - which if I recall correctly took around five minutes - a shovelful of cuttings was removed and placed in a line. This gave a visual indication of the profile of the borehole. Starting at the left foreground, the drill cut through several metres of orange-coloured clay (this possibly explains the orange-coloured well water), then smaller sandy-like material, followed by a beautiful light blue clay, which I think would be the envy of potters anywhere. 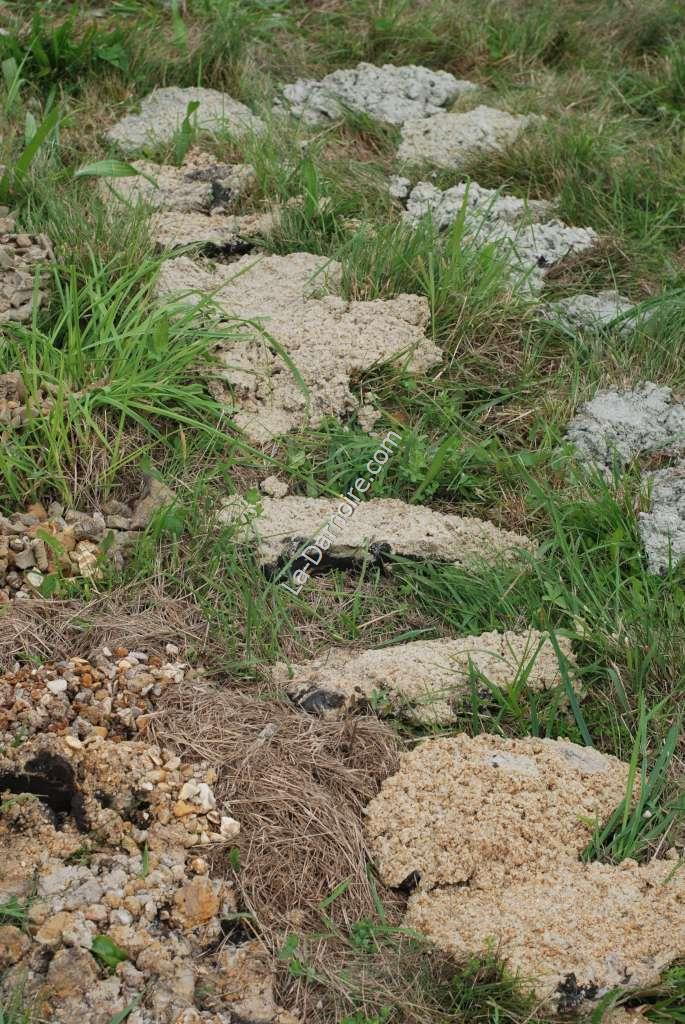 I decided to include a photo of the blue clay! 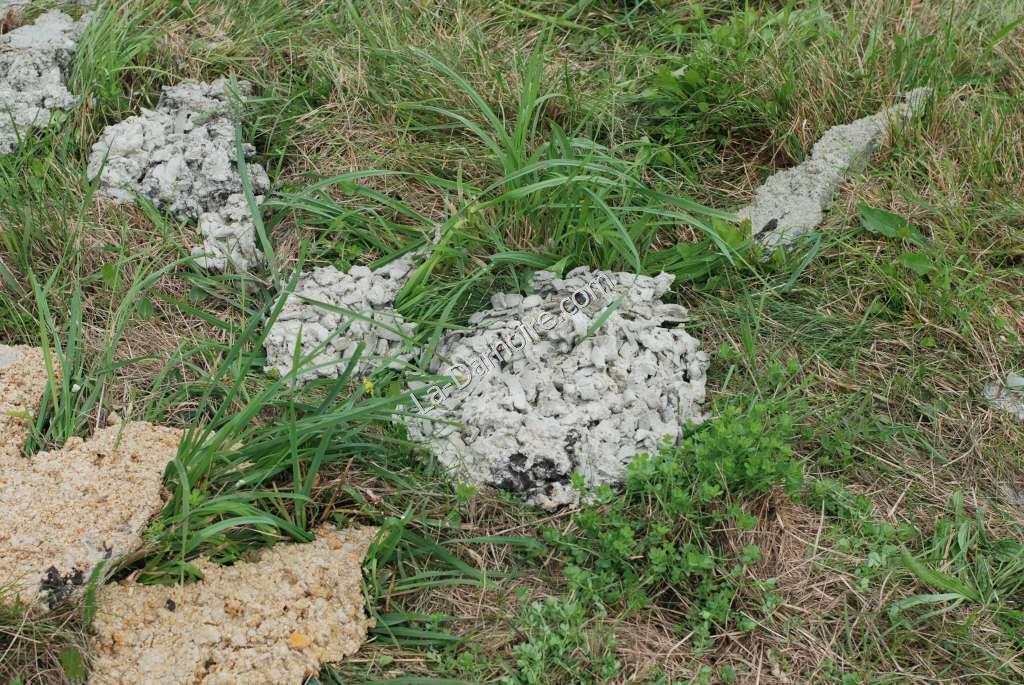 The drill operator reported a small amount of water at a depth of 5 metres (that's roughly the level of the well), and a larger amount at 24 metres. He kept going though. At 35 metres a good strong flow of water was encountered, and this persisted down to a depth of 49 metres where drilling stopped. The drillers then knocked off for lunch.


Upon their return the drill shaft was removed from the hole, and blue plastic pipes 4 metres in length with an internal diameter of 125mm were then fitted to the drill mechanism. The first pipe had a fitted cap on the bottom end. The pipes were "drilled" into the hole one at a time; each one screwing into the top of the previous one. The first and second pipes had numerous small slots in the walls to allow the inflow of water.

Once the plastic liner had been fully installed, several bags of sand were poured into the outside of the hole to stabilize the pipe. You can see the drilling pipes on the trestles on the right of the photo. 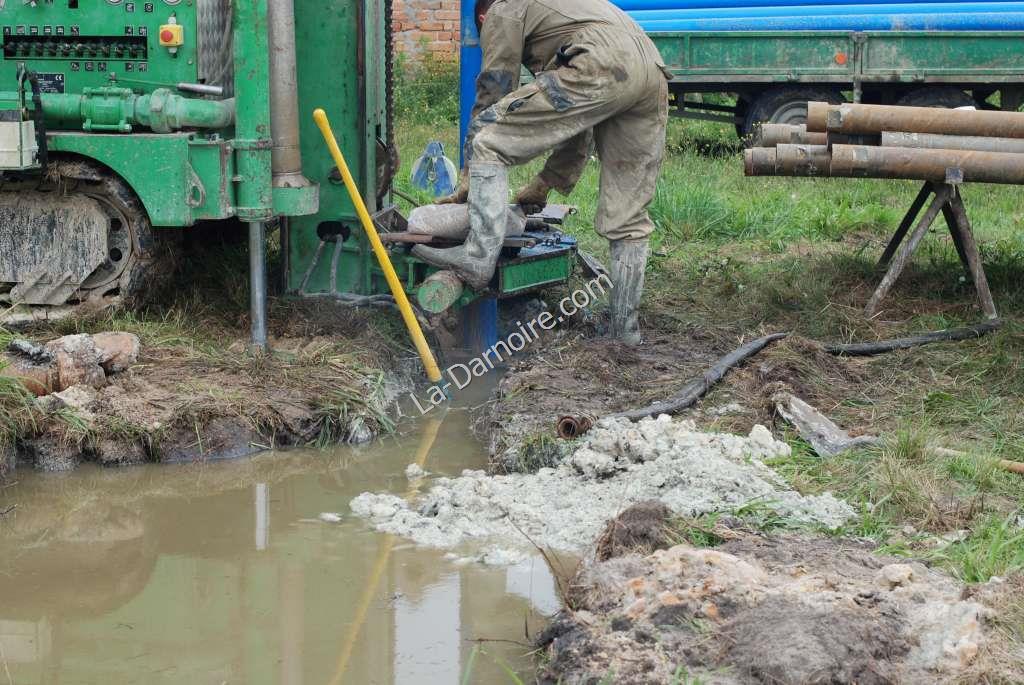 A hole was then cut into the topmost plastic tube, and an airline inserted. Air under very high pressure is injected at the bottom of the borehole. This stabilizes the sand and also flushes out the gloopy drilling-mud water. 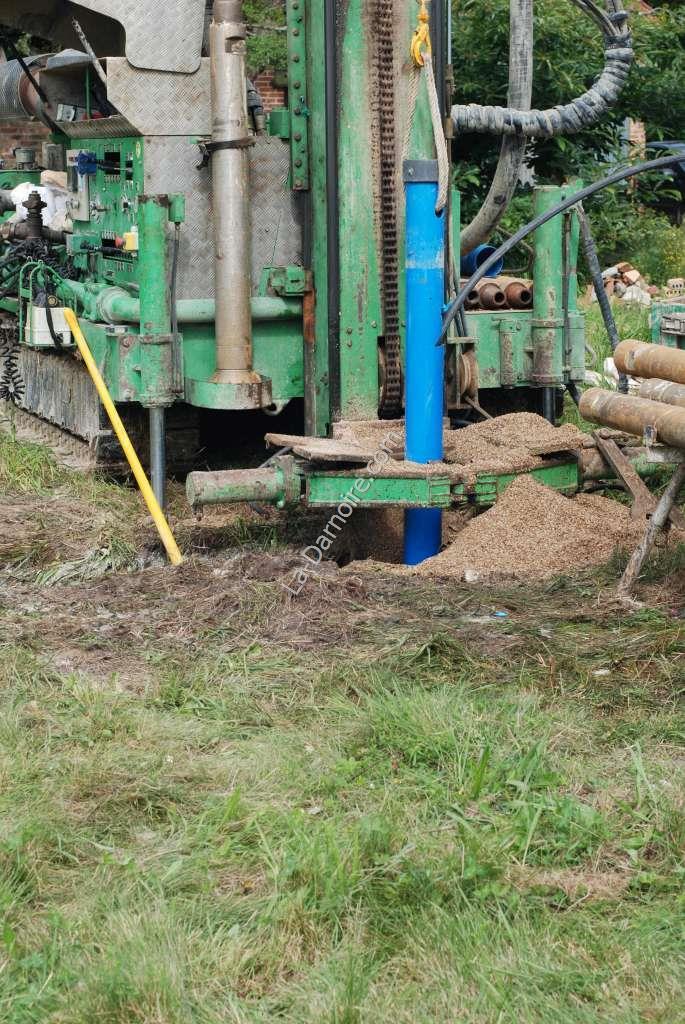 The compressor started up. 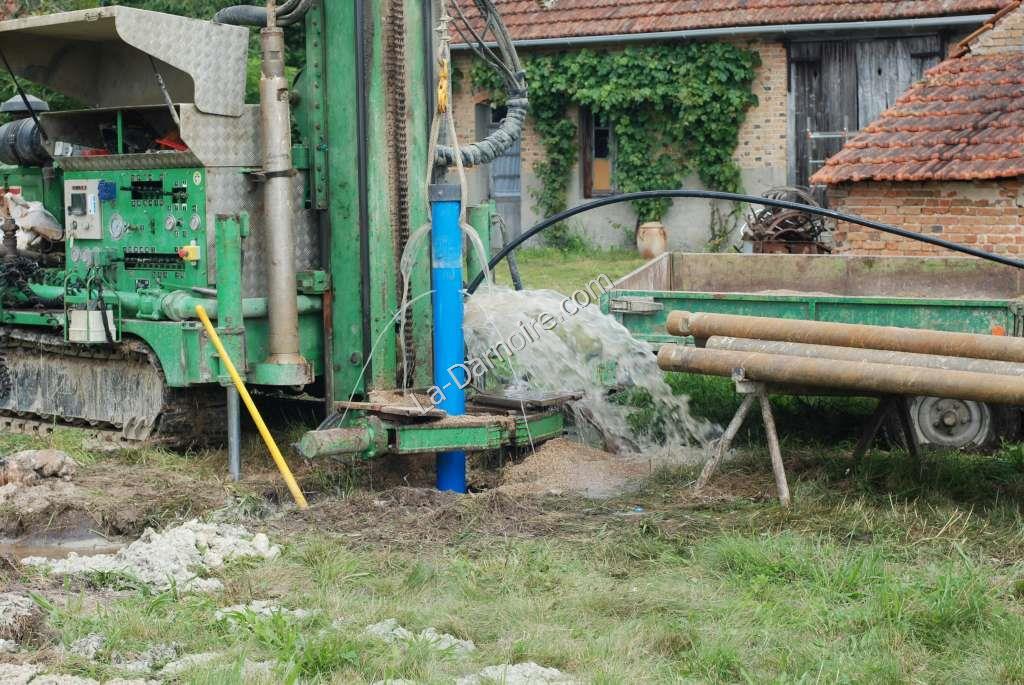 In the next two photos the compressor is at full power. The water pulsing out of the borehole becomes less and less "gloopy"... 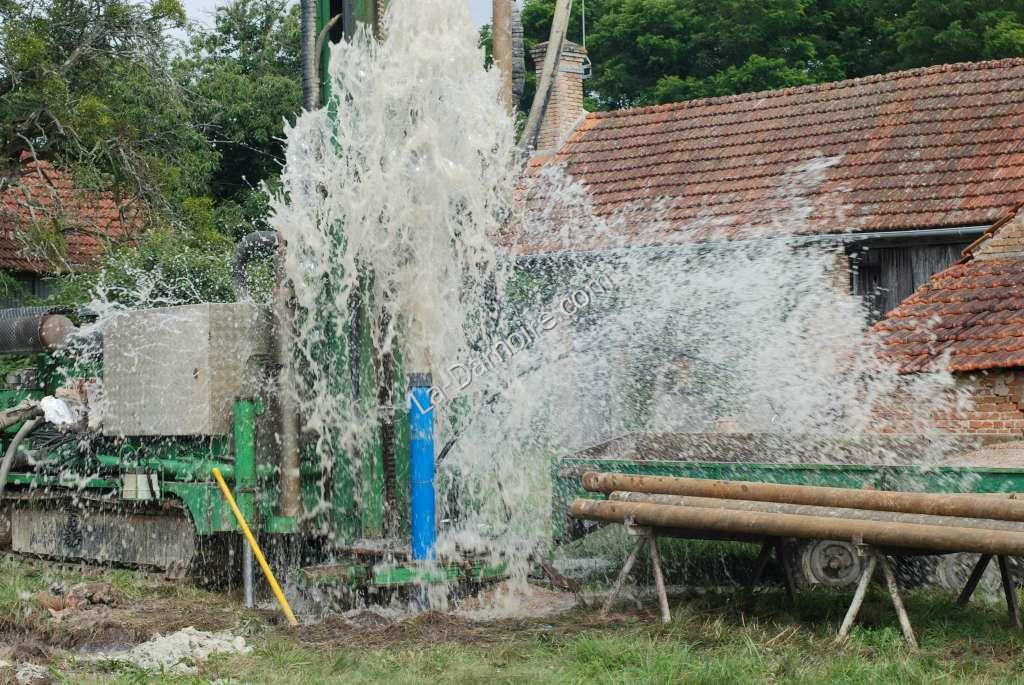 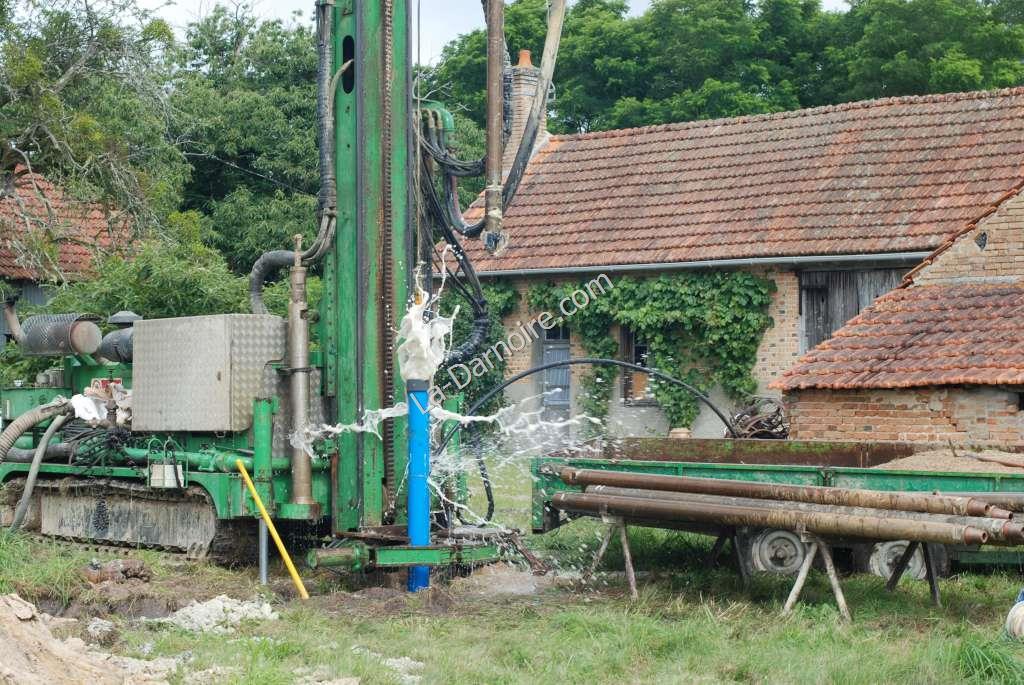 ... until it's completely clear. The water now pulsing out of the borehole is the actual ground water from 49 metres down. 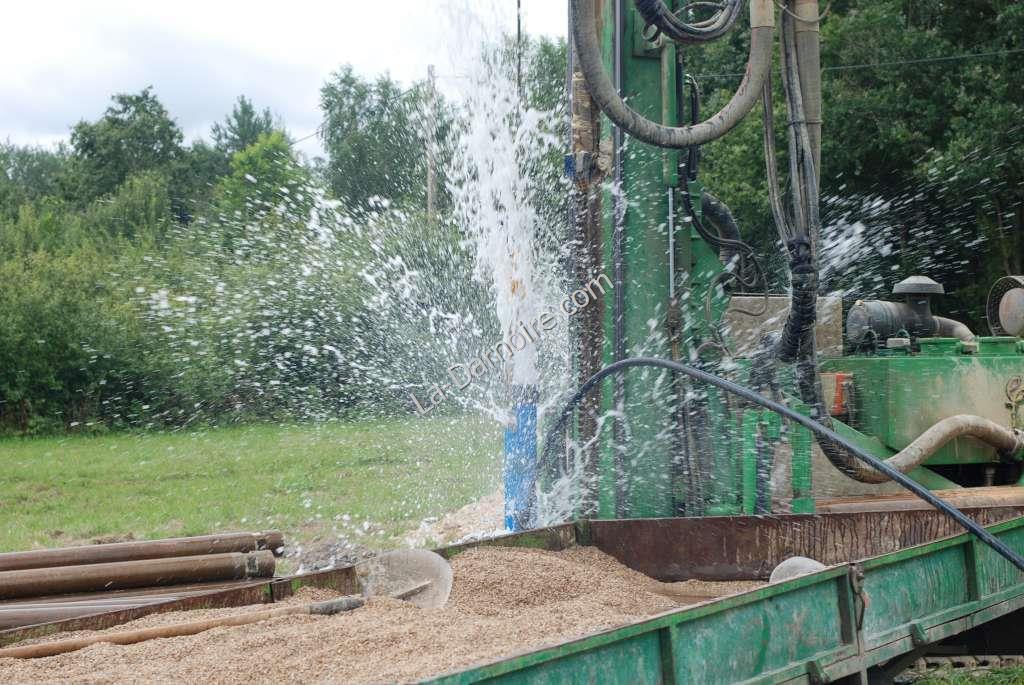 The compressor was then switched off, and a bag of cement was poured around the borehole pipe to keep the top part from moving. A few minutes later an electronic sensor was lowered down the borehole to determine the water level. The water in the tube had already risen considerably, and was 19 metres below ground level. The driller recommended that the pump be situated at a depth of 40 metres below ground.

The equipment was then packed away and the drillers departed. It was up to us to fill in the three mud-holes. We did this over a period of several weeks. With a shovel and the wheelbarrow. 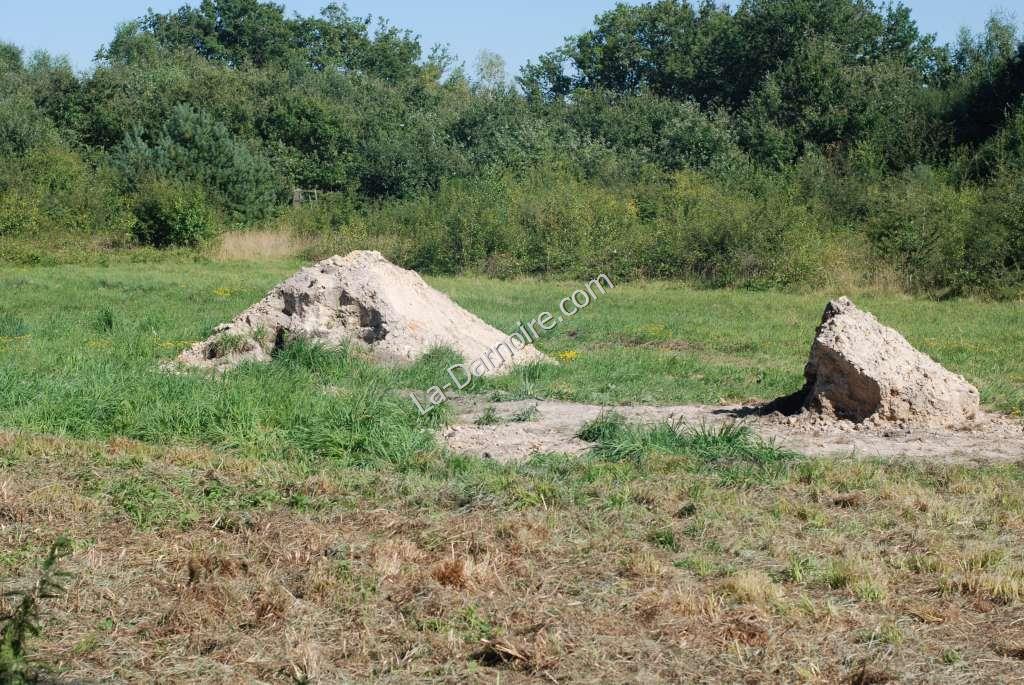 Phase one completed! The next task was to source a borehole pump.